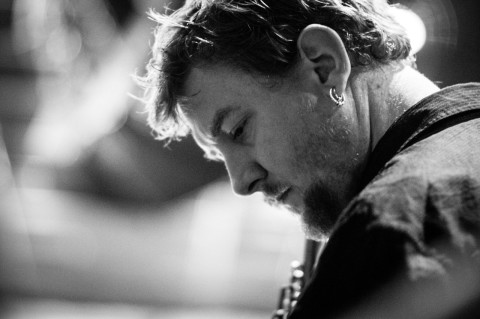 I was born in 1981 in the city of Petrozavodsk. Ancestors on my mother’s side had rustic roots of peasant life, and on my father’s side, the urban intelligentsia and the clergy. Although I was born into a family of musicians (my parents met in Petrozavodsk musical college), my professional musical career did not begin with early childhood piano or a violin in my hands like most future musicians but in singing with the boys choir at the Palace of Pioneers in Petrozavodsk. With this choir I received my first concert and tour experiences in life.

When I broke my voice in the fifth grade, on the advice of my father (a professional drummer, teacher at the Conservatory, one of the first DJs in Petrozavodsk, and a show performer), I was determined to learn folk instruments, with emphasis on the accordion, with his words of «Now you will learn to play son, we will go to crap but you will always be with money» — Wise words! Thus began my studies at Republican Art School # 1.
As a child of musicians, I certainly have been versed in a group of theoretical music disciplines but no trained ear like the strongest children (who learned all of this from the first grade) and the same thing happened with the general piano, from an abundance of information in my swell head and lack of understanding of what is happening in the process.

Studying was not easy in practical and psychological terms, as I changed schools and accordingly, my acquaintances. As you can imagine, after a short time, I was transferred to a group of fellow classmates, whom I corresponded better to on a musical-theoretical basis. Subsequently, arrived a new teacher for ear training and music theory with a unique approach, and who related well to us misfit gougers and nihilists. It was at this moment when genetics took over, and I had a leap in understanding the gamma device, tones, chords, melodies, and how to synchronize this information with an ear for music, which I fortunately had since early childhood. The result was that when I had used to copy others homework, dictation and chords by ear, now they were copying off of me…

After two years of accordion, I lost patience with this instrument and upon the departure of my father on a long tour abroad, I joined the percussion class, but the two years of experience wiggling fingers on the accordion was very useful to me in the near future on keyboards…

At the end of 9th grade in 1995, soon I had to choose between music and cabinetry in a vocational school. I enrolled in Petrozavodsk musical school named K.E.Rautio on branch classical percussion. In 1996, I became interested in percussion instruments from Latin America. Without much to go on, a theoretical learning process took place at a video-school and by removing the ear percussion lines from the cassettes. As a result, after the production of improvised percussion instruments and long conversations with my father, who saw my interest in percussion and progress in the knowledge of not only the classic material in school, it became clear that I needed a real instrument.

As a result, we agreed on a gift for me, and in 1998, returning from a tour in Germany, Dad brought me conga! From the first moment, the learning process of this instrument went quickly, beginning with the practical application of knowledge and also with playing with older and more experienced musicians.

In the winter of 1998, my friends and I organized the trio «Reel» — later to become the notorious world-music project «Va-Ta-Ga». Instruments that I slowly mastered, were collected into a sort of organizational system of sounds and rhythms, which created the rhythm, the catch and the pulse. In 1998, as part of the national team «Tsarevichi», I went on my first trip abroad to Germany, where I had many first-impressions. We played mostly on the streets, some concerts in nursing homes, other places as well…

In 2000, I graduated from college and enrolled in Petrozavodsk Conservatory at the Faculty of performing classical percussion. In parallel, there were tours with the group «Va-Ta-Ga», acquaintance with unique musicians at festivals and study of various performing traditions of countries of the world.

My education at the Conservatory did not happen smoothly because of my frequent absences, academic leave and the birth of my daughter, the sequence of which delayed my training. With the increase in popularity of the group Va-Ta-Ga, concert halls became bigger and there was a need to enhance the sound of the shock section to the percussion kitchen, we eventually added elements of drum and iron, but it was still a percussion kitchen.

In 2007, after the collapse of the musical project «Va-Ta-Ga» and lack of tours, attempts were made to raise local musical and commercial fronts in Petrozavodsk. It was a harsh time and poverty forced to me to work in a restaurant as a drummer. We played jazz standards and some improvisational compositions … several musical projects were established in a variety of genres and production center in support of this.

Among the local projects you can find my long-held dreams of youth in the drum music ensemble «RhythmSekta». One fine day there was an attempt to create a drum section from a skeleton, I shared with my friends all of my accumulated knowledge and experience playing the drums of various nations of the world, and most importantly, the idea that with help, one can earn money. We then went to St. Petersburg and bought there a few drums from Ghana. Once home, we realized that what we had done was the creation of joint property and capital, so we arranged it as a legal entity. We organized parties in the winter and open-air celebrations during summer. Life was good, we had saved up some money and «stirred up» our sound, with help we «climbed» in the club business and owned at that time the most popular club in Petrozavodsk. Club Porshen (Piston) was a base for rehearsals and headquarters for many different things.

But musical ambitions don’t give you any peace, even when realizing that I had strong word in my native tongue in the world of music… As a result, we continued the music and concert activity with the rhythm section of Va-Ta-Ga in a new format, a new instrumental trio called «Devotees» (later called Asketics). Here I was the drummer and played in the classic sit-down position.

Ever since the beginning of my fascination with percussion a technological leap occurred in the music industry in association with the development and accessibility of digital technologies in different stages and different degrees have been mastered; electronic drums, sampling, synthesis as well as in simple musical production and a craving for multi-instrumentalism passed on from father to me .. So in the winter of 2012, by coincidence, I got an alto saxophone, tried to play it, and later on I bought a soprano of the old West German production from an ad online, I mastered «a couple of notes» and was very pleased. Over the years of traveling, touring and making acquaintances, I collected a great number of different percussion instruments, ethnic wind instruments, electronic percussion and, most importantly, the acquired experience in the practical application of the entire arsenal of different musical genres and experience in improvisational music making, it has been very helpful in pilot projects, such as «aapsylo».

Solo electronic creativity found its expression in micro-music. As a person who grew up in the era of the boom game consoles playing Dendy, I got acquainted with the phenomenon like 8-bit, I always listened with delight at the huge number of passed and not passed games, often while skipping school.

In the 90’s, the music of Jeroen Tel in games differed in considerable intelligence, the correct form, harmony, melody lines that thankfully caused a lot of emotions. These emotions frequently made an impression on young minds, forever instilling the love of 8bit music. At the same time in my life was the process of getting a music education.

In the autumn of 2007, a first for the organization of the event «BIT FOR BEAT» got acquainted with the works of such masters of the 8-bit scene such as: «STU» and «Gameboydrice». After seeing first-hand how you can make this kind of music on readily available things and hear how it all sounds so great, I conceived the idea to carry out an old dream and try my hand at this genre. Later, by ads in the newspaper, I purchased a GameBoy-Color, then with a random visit to St. Petersburg, I acquired the cartridge program to create LSDJ music and began tinkering with letters and numbers, in the fighting backgrounds. The appearance of the first brick game(GameBoy-Original) changed the sound for the better. We used the 8bit sound sample and implemented it in existing projects, such as the project ‘Aapsylo’ or Asketics. At the same time, there was work on the general sound of our speaker systems, the search for sound effects, cords, and the LSDJ study program. But mainly, in any kind of music, there remained and remains the musical thought … and availability of education is far from superfluous.

Around the fall of 2008, the first solo debut attempts were made as an 8bit musician. So «Arkubus» became the first project in the genre of dance 8-bit music in Petrozavodsk and Karelia, this movement cultivated in my homeland of the harsh Karelian terrain …. Trying my hand in solo performances resulted in an explosive dance set that evolves and continues to change.
To date, the basic realization of the music continues with the Asketics trio, as a drummer and multi-instrumentalist. Recently, having a go as a singer. We play jazz or pop, myself as a drummer or a percussionist, with different compositions, and now we are launching the next club project.